Soon after we began to grapple with the COVID-19 pandemic spreading across the United States, there were calls to release disaggregated data about cases and deaths. Some like to say the virus does not discriminate – and indeed its wide-ranging impacts affect us all. However, as more data becomes available, we clearly see that the effects of COVID-19 are not evenly spread across the population.

Almost all state health departments report cases broken down by age and sex, and most (including Wisconsin) now include racial/ethnic breakdowns, according to information compiled by State Health & Value Strategies. The Centers for Disease Control and Prevention (CDC) began releasing data disaggregated by race and ethnicity as of April 17. The available information reveals alarming disparities by race and ethnicity, exposing a disproportionate impact on people of color that mirrors existing inequities.

While this data is a starting point, it is too often lacking the context, comparisons, and caveats necessary to help make sense of the gaps we are seeing. Data never speak for themselves. Public reporting of raw numbers without adequate explanation or interpretation can limit public health efforts to communicate the risks and effects of the pandemic and to promote an effective, efficient, and equitable response.

“Data never speak for themselves. It is the questions we pose (and those we fail to ask) as well as our theories, concepts and ideas that bring a narrative and meaning to … statistics of all kinds.” – Lawrence Bobo, Harvard University

Below we highlight three areas where data contextualization is needed to better understand the COVID-19 disparities playing out in Wisconsin and across the nation, particularly when presenting racial/ethnic differences. Reporting of disaggregated data should:

Data from the Wisconsin Department of Health Services (as of May 27) shows over 16,000 confirmed cases of COVID-19 in the state; 52% of those were White compared to 20% who were Black. Without population comparisons, it is not evident how the proportion of cases relate to the general population, masking the degree of the disparity. As shown below, the percentage of cases and deaths for Black residents in particular far exceeds their percentage in the state population. 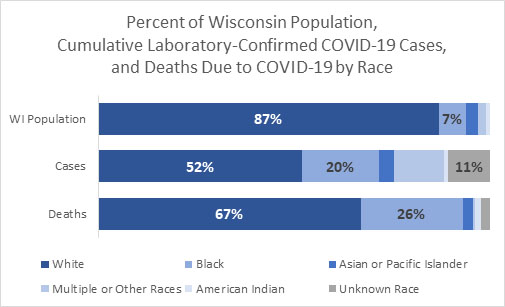 Another way to compare is by looking at the rates of cases and deaths per 100,000 population. Rates put these numbers into context by allowing for more direct comparisons between Wisconsinites of different races and ethnicities. For instance, statewide there were 829 cases per 100,000 population among Black Wisconsinites, compared to 169 among White Wisconsinites. This drastic difference is clear when we look at the rates according to population size (on the right in the figure below) compared to the raw counts (on the left), showing a disproportionate impact on people of color in the state.

Notes:  These numbers are based on counts of cumulative cases and deaths as of May 27, 2020. Population adjusted numbers are not included for other racial groups for deaths due to COVID-19 because the number of deaths in those groups falls below 20, a frequently used threshold for reporting.

Comparing rates between groups bring these gaps into clearer focus. Black Wisconsinites are about 5 times more likely to be diagnosed with COVID-19 and about 5 times more likely to die from it, compared to White Wisconsinites. The data also shows a disproportionate effect on the Hispanic/Latino population, who are about 8 times as likely to be diagnosed compared to non-Hispanic or Latino. These disparities fall well above the urgent range,1 even when adjusting for missing data2.

Presenting stark group differences without further explanation can leave people to draw their own conclusions. Those conclusions can gravitate toward individual blame or group stereotyping rather than connecting to the long-standing, systemic issues that underpin differences in health outcomes, often referred to as structural inequities. Lack of access to health care, income inequality, and residential segregation, driven by structural racism, all contribute to worsened underlying health issues and lower life expectancy among Black Americans and other communities of color, increasing the risk of complications from COVID-19. This is exacerbated by experiences of chronic stress and discrimination. People of color are prevalent in many frontline occupations more likely to be exposed to COVID-19, such as home health aides, store clerks, day care providers, public transit, warehouse workers, and delivery drivers. This may stem from entrenched barriers to education and job opportunities, despite persistent efforts of people of color to gain access to high quality education and employment that would increase social mobility.

The effects of this pandemic reflect and magnify inequities that already exist in Wisconsin and across the U.S. It is critical to make this explicit when reporting group differences.

One way to underscore these related factors is through maps or other data visualizations that integrate COVID-19 data with relevant information about the place, including racial/ethnic composition, gender and age breakdown, economic indicators, housing density, and so forth. As one example, the mapping function on Milwaukee County’s COVID-19 Dashboard allows users to view population-adjusted case data within specific municipalities and zip codes and overlay certain demographic and risk factors. In addition to visuals, it is important to incorporate narrative that explains the purpose of such data overlays and intentionally calls out how disparities reflect place-based risks and inequitable resource allocation. This context can help to counter misinterpretations and promote focused responses where they are most needed. 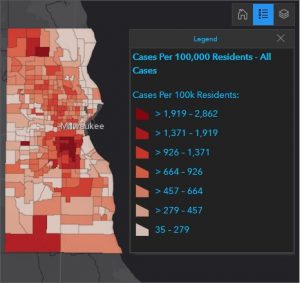 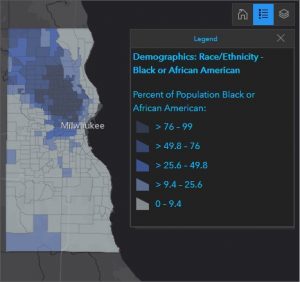 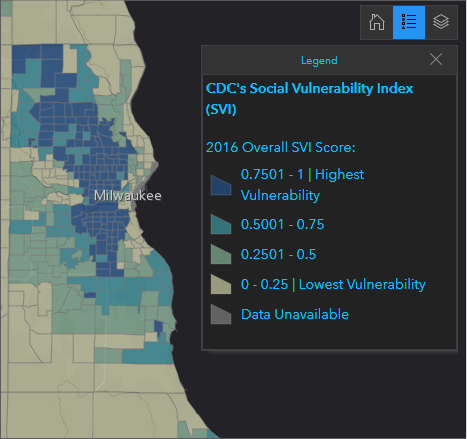 Notes: Accessed May 27, 2020. The CDC Social Vulnerability Index (SVI) includes “a number of factors, including poverty, lack of access to transportation, and crowded housing [that] may weaken a community’s ability to prevent human suffering and financial loss in a disaster.”

Limitations in Data Collection and Analysis

The ways we collect, analyze, communicate, and disseminate data matter. Recognizing the limitations of data is a crucial piece of understanding what they can say, what they cannot, and where we can do better in the future. As more granular data are reported by race around the country, we need to recognize and work to address limitations and understand what they tell us.

For example, the number of confirmed cases that are reported likely underrepresent the actual numbers. Racial disparities in front-line occupation workforces, underlying conditions that make individuals more susceptible to infection, COVID-19 disease severity, availability of testing, health care capacity, who seeks care, who is hospitalized, etc., can impact who is tested and diagnosed as COVID-19 positive. The diagram below illustrates the many levels at which counts may be affected by disparities in exposure, testing, diagnosis, treatment, hospitalization, and deaths. Unequal access, discrimination, and other factors encountered at each level can lead to unjust outcomes that perpetuate existing inequities. 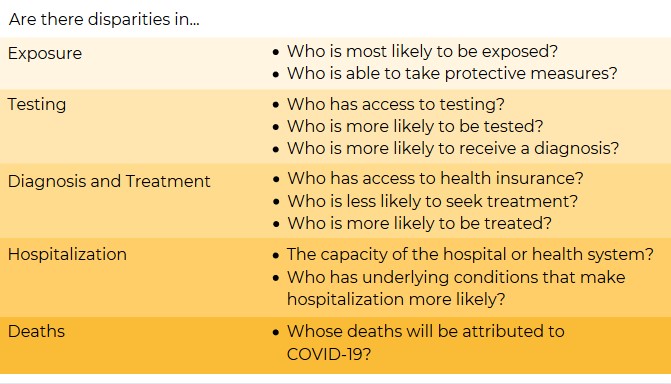 The Crucial Role of Public Health

Public health entities play a key role in providing data for public consumption. Being clear and direct about what the data say, what they do not say, and how they relate to existing inequities can help communities learn from what is happening, urgently address current issues, and prepare for what is to come.

Public health data also informs media messages and shapes public conversation. Without interpretation and explanation, reporting disparities can unintentionally reinforce harmful biases by perpetuating myths and misunderstandings. Raw numbers can obscure the fact that each case and each death represent a real person affected by COVID-19, and a sphere of families, friends, and communities experiencing the effects of their illness. But with regular reporting and contextualizing of disaggregated data, we can draw attention to the conditions in which people live, work, learn, and play, and promote responses that start to tackle deeply embedded structural inequities. Recommendations should go beyond calling on individuals to practice social distancing and recognize the role of businesses, institutions, and governments to take actions that prioritize protections for essential workers, supports for those experiencing financial instability, and equitable access to testing and treatment.

This pandemic has laid bare the many ways our lives and health are intertwined. While we have seen a concentration of cases in dense, urban areas in Wisconsin so far, trends indicate that the virus is moving further into less populated and rural areas of the state. It will take all of us working together, ensuring the safety and care of everyone in our communities, to slow the spread and build a fairer and just future.

by Hilary Joyner and Olivia Little

2 Missing race and ethnicity data may bias our estimates of disparity ratios. We examined the possible effects of this bias by assigning cases and deaths with unknown race or ethnicity based on different assumptions. First, we allocated cases and deaths based on the known proportion of cases with each race. Next, we performed calculations assuming all unknown cases were black (race) or Hispanic (ethnicity). Finally, we calculated disparity ratios assuming all unknown cases were white (race) or Not Hispanic or Latino (ethnicity). While these scenarios created some variation in the disparity ratios, they remained similar to those calculated while using Complete Case Analysis by excluding cases with unknown race/ethnicity from our calculations. (Range of black:white case disparity ratio 4.73-7.18, range of black:white mortality disparity ratio 6.81-7.29, range of Hispanic:Non-Hispanic case disparity ratio 4.97-7.73)