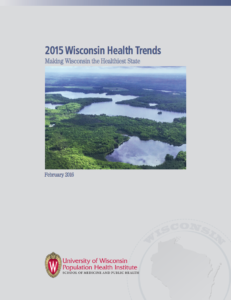 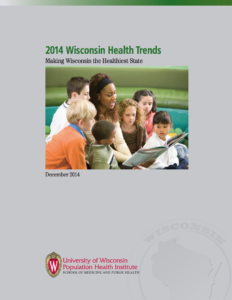 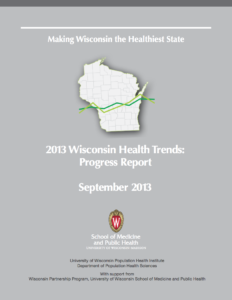 Why do we need a report on health trends in Wisconsin?

Looking at long-term trends on leading health indicators in Wisconsin helps researchers, policy makers and others interested in the health of our state assess where improvements are occurring and what indicators require more attention. Wisconsin may choose to capitalize on already improving trends and invest resources to make them improve at a quicker rate. Conversely (or ideally simultaneously), Wisconsin may choose to focus attention on worsening trends and develop interventions to reverse them.

Why are two assessments of each measure presented?

The progress report displays two assessments for each health indicator:

Using these baseline trends, we determine what the “expected” current rate would be for each indicator if the past 10 year trend continued. We compare this expected rate to the current “observed” rate, to see if it is better or worse. Current progress is determined by comparing the observed rates to the 90% confidence intervals of the expected rates

How are the disparity graphs helpful?

The disparity graphs highlight important differences in health among subgroups on the same health indicator. The graphs highlight areas where Wisconsin could be doing more to promote the health of all people in the state. For example, smoking rates are much higher for blacks/African Americans compared to whites. Targeted interventions to reduce smoking in the African American population will help reduce this disparity.

How were subgroups chosen to be included in the disparity graphs?

The population subgroups graded in the Progress Report were selected to illustrate a variety of characteristics, or domains, across which health disparities exist. The areas match the disparities highlighted in the Report Card. A total of four domains were selected for inclusion in the Progress Report: gender, education, county urbanization, and race/ethnicity. This list does not cover all disparity domains, such as income, disability, and sexual orientation; because comparable and reliable data on populations defined by those important characteristics were not readily available.

Education: The domain of education was included in the Progress Report as an illustration of socioeconomic disparities in health.

Urbanization: Where someone lives can have an impact on their health, so the domain of urbanization was included to illustrate differences in health based on the physical and social environment. Urbanization is a measure of the degree of urban, or city-like, character of the county in which a person lives.

Race/ethnicity: Health disparities between racial and ethnic groups exist in Wisconsin and across the entire United States. For this Progress Report, health is assessed for all racial/ethnic groups where data is available.

Although the disparity graphs are broken out by subgroup, these subgroups are not independent of one another. For instance, a higher rate of poverty, lower level of educational attainment and clustering in urban areas are common among minority ethnic/racial groups at the state level. These disparity graphs are a snapshot into the ways in which disparities exist among health factors and outcomes in the state. Developing an understanding of why these disparities occur requires knowledge about existing programs and policies and also health behavior patterns of the different subgroups. We encourage using these graphs as a starting point for further investigation into why disparities exist, why some are worsening, and for finding interventions to reduce and eliminate them.

How was the Assessment of Wisconsin’s Health Trends Performed? (PDF)

What measure is used to evaluate the trend over the past ten years?

How is the current year of data assessed and evaluated?

Using the 10-year baseline trends, we determine what the “expected” current rate would be for each indicator if the past 10 year trend continued. We compare this expected rate to the current “observed” rate, to see if it is better or worse. Current progress is determined by comparing the observed rates to the 90% confidence intervals of the expected rates.

How does Wisconsin compare with other states?

What are some limits of this method?

This is only one way to assess health trends. Our method may be limited by the fact that we assume a linear trend for all measures. This may not be the case for all health factors, such as unemployment, which is cyclical in nature.

The regressions we constructed used only 10 years of data. Regression analyses perform better statistically with more data points. However, due to our interest in present trends we chose to only use the 10 most recent years of data to construct the regression trend lines.

We report all measures independently as if each one impacts health by itself. In reality the many factors that impact health are intertwined. For instance, a parent who is unemployed may also have children in poverty and be uninsured. Health factors relate and work together.