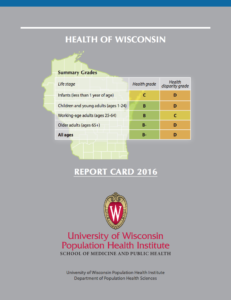 Public and private sector policy makers are making decisions every day regarding programs and policies that affect health in the state, from medical care to public health to socioeconomic status. Knowing how healthy the population is overall and for specific subpopulations can be useful in resource allocation decisions for health improvement. In addition, this information is intended to be useful in developing five year plans for the Wisconsin Partnership Program as well as the State Health Plan for 2020.

This Report Card grades Wisconsin separately on health and health disparity in order to assess the state’s progress towards achieving two of the goals outlined by the Healthiest Wisconsin 2020 state health plan: to protect and promote health for all, and eliminate health disparities. Wisconsin’s health grade of B- is based on the average health of its residents and, therefore, is dominated by the health of the majority population. Even if Wisconsin were to receive a grade of A for health, it could still be performing poorly in terms of health disparities and have numerous population subgroups in need of improved health. For these reasons, health and health disparity were assessed separately in this report.

Every fall, the United Health Foundation publishes “America’s Health Rankings”, ranking the health of the 50 states. However, the focus of this report is almost entirely on health, not health disparities. Other recent rankings from the federal Agency for Healthcare Research and Quality and from the Commonwealth Fund report primarily on the quality of the State’s health care systems (e.g., hospitals, doctors, home health care) and not on the overall health outcomes of the population and subpopulations.

The population subgroups graded in the Report Card were selected to illustrate the variety of characteristics, or domains, across which health disparities exist. A total of four domains were selected for inclusion in the Report Card: gender, education, urbanization of county, and race/ethnicity. This list does not cover all of the disparity domains reflected in the Healthy People 2020 goal to eliminate health disparities, such as income, disability, and sexual orientation because comparable and reliable data on populations defined by those important characteristics were not readily available.

Gender: Although some differences in health between males and females may be due to biological differences between the sexes, other gender differences in health represent inequities – or differences in health that are unfair or unjust. For example, homicide rates are higher for men and depression is more common among women.
Education: The domain of education was included in the Report Card as an illustration of socioeconomic disparities in health. Educational attainment was examined for adults 25 years of age and older, but this same descriptor is not applicable for children who are currently in school. Therefore, the domain of education was not included for children and young adults. For infants, the education of the mother was used for this domain.
Urbanization: Where someone lives can have an impact on their health, so the domain of urbanization was included to illustrate differences in health based on the physical and social environment. Urbanization is a measure of the degree of urban, or city-like, character of the county in which a person lives.
Race/ethnicity: Health disparities between racial and ethnic groups exist in Wisconsin and across the entire United States. For this Report Card, health is assessed for five racial/ethnic groups, with all groups other than Hispanic/Latino representing non-Hispanic ethnicity.

How do the results in the 2016 Report Card differ from previous versions?

Most subgroup death rates or unhealthy days per month values differ from the 2013 Report Card. Many subgroups improved the health of their subgroup but did not improve rapidly enough to result in a grade change on the 2016 Report Card. To see a comparison of results and grades between 2016 and 2013 see the tables below.

If you prepared the Report Card by population subgroup rather than by life stage, what would the reports look like?

The Health of Wisconsin Report Card is organized so that the disparities existing between subgroups within life stages can be examined. Therefore, we examine the different grades within each life stage and do not focus our analysis on the grades Wisconsin receives for each subgroup across its life course. However, for those interested, report cards organized by subgroup are below.

In order to give Wisconsin and its residents grades for the health outcomes of death and unhealthy days, we created grading scales. We looked at the distribution of health within each life stage for Wisconsin to see how far the rate was from the average for the life stage:

The life stage health disparity grades are based on a weighted proportion of subgroup grades that were less than the best grade achieved by any subgroup. The method is based on an approach recommended by the U.S. Department of Health and Human Services (Keppel K, Pamuk E, Lynch J, et al. Methodological issues in measuring health disparities. National Center for Health Statistics. Vital Health Stat 2(141. 2005)). This approach is being used to monitor progress towards the Healthy People 2020 goals to eliminate health disparities by assessing disparity across multiple subgroups using an index of disparity. 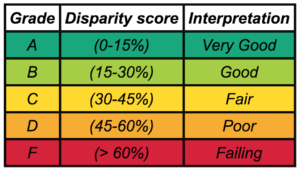 What are death rates?

Death rates are based on counts of the number of deaths occurring in a population group divided by the total number of people in that group. These numbers are then converted to reflect rates of death per 100,000 people (per 1,000 births for infants). We report rates based on the most recent 3-year period for which data are available nationally: 2012-2014. The death rates are adjusted for age (except the rates for infants and older adults by education).

Where do the death data used in this Report Card come from?

We report data for the most recent 3-year period for which data on unhealthy days are available nationally: 2012-2014. The mean number of unhealthy days per month are adjusted for age.

For more information on unhealthy days, see How Should We Measure Health-Related Quality of Life in Wisconsin? on the UWPHI website.

Death rates: All death rates are adjusted for age, except the rates for infants – because these rates are not typically adjusted for age – and older adults by education – because census denominators by age were not readily available for those 65 years and older. Data obtained from WONDER and WISH were requested as age-adjusted numbers in the queries. Death rates by education for working age adults were adjusted using the age groups of 25-34, 35-44, and 45-64, and population weights from the U.S. 2000 Standard Population.

Materials for Media or Presentations